If you'd asked me one year ago if I'll ever make a remix again, I probably would have said no. But as changing my mind became a personal trademark, I can offer you a finished piece today.
Wynardtage makes dark electro in vein of Suicide Commando and Wumpscut. It was an interesting trip tearing down its concrete industrial walls and building something new from scratch. The result is still dark, but instead of rusty and industrial, it sounds rather cold and futuresque. 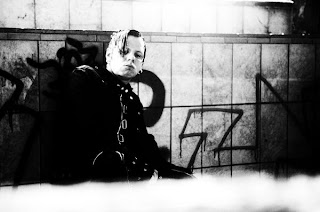 The year 1994: I am 16 years old and want to become a famous dark electro artist. I start my first project: Mildreda. My brother who is two years older than me wants to become a writer and a poet. He’s actually doing a very good job, so I ask him to translate some of his poems for me to use as ‘lyrics’ for my songs.
We’re still 1994: After a disastrous first demotape I make my first ‘real’ cool sequence. At that time I didn’t have my own keyboard yet, so I use the Yamaha PSR 400 that belongs to my friend. Not knowing anything about programming I still play everything in ‘real time’ straight into the sequencer and (imagine this) I haven’t discovered the quantise function yet. So yes: hi hats, beats, snares and bass line live a life of their own. But still: I feel this is the beginning of a great adventure. My brother comes up with very cool lyrics, and that’s how the first version of “The Parting” was born. It’s pretty much the blueprint of all other songs I will compose later on.
1996: I make a new version featured on my first professional-like demotape ‘De Laffe Denker’. Johan Van Roy tells me he likes it and I am the proudest kid on the planet.
1999: Heyaeb releases a cover version of “The Parting” on their debut maxi ‘Aperi ventes’.
Somewhere at the end of the previous century: The friend who lent me his keyboard back in the days is also still working on lots of music and projects worth writing a book about it. Under his new Foochow-flag, his final and most successful project, he also makes a cover version of “The Parting” but it remains unreleased on a minidisc somewhere in his attic now.
Summer 2009: Mildreda is dead. Heyaeb is dead. But the melody of “The parting” is still haunting my head. There is something mythical about the track: I still think the lyrics are absolutely übercool and all my friends who were there at the beginning can sing along with the melody even today.
So I guess I simply have no choice but to revisit the song again and make a most definitive and ultimate version of the track. Stay with us as I would like to share the making of the track with you on these pages by dropping videos and demos now and then.
Email ThisBlogThis!Share to TwitterShare to FacebookShare to Pinterest

We need your votes!

Once again we need your votes!
Gwenny made a little short movie for the Ostend Filmfestival. It’s a contest for the best 3 minute and humouristic movie. The short movie features a soundtrack by Diskonnekted.
We had fun making it, I hope you have fun watching it.
I hope we can count on your vote! Vote for Gwenny Cooman’s “Continuum”.
You'll get a confirmation mail (in Dutch) to confirm your vote by clicking the link.

Today we wave the traditional band website goodbye. The internet is full of interesting networks so why loose time and effort in doing everything ourselves?
From this day on we will welcome you on these pages where you can learn everything that’s new in the Diskonnekted hotel.
Stay tuned – stay 'konnekted'.
Email ThisBlogThis!Share to TwitterShare to FacebookShare to Pinterest