Usually I wouldn’t bother, but when I recently heard a famous colleague speak out about Darwin, I felt I had to post a reaction. Fed by superstition, an unhealthy dose of paranoia, and total ignorance about science, some statements were made about the theory of evolution that were both false and sad.

Back in the days, when writing the song ‘After Einstein’, I had this kind of ignorance in mind. The Zillo interview (October 2005) is an ideal way to bring the discussion back to the surface, and to give some clarity on ‘After Einstein’ and its underlying criticism on creationism and other blurry worldviews. 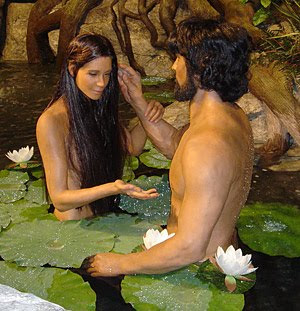 It’s actually a happy coincidence having those anniversaries this year. I picked up Einstein as he is a real symbol of scientific breakthrough and knowledge. ‘After Einstein’ reflects on knowledge in general, and how people deal with it. Science today has cleared up a lot of things, and has answered a bunch of questions that remained dark for us during centuries.
People however choose to create their own answers on things, intermixed with their own ideological, philosophical and religious ideas. This of course leads to a somewhat blurred state of mind. It’s for example very frightening to see conservative politicians trying to keep Darwin out of the schoolbooks so they can protect their religious believes.

Zillo: Please say some words about the lyrics of ‘After Einstein’. What’s your intention behind them?

Lyrically the song is an attack on people who choose to remain plain stupid while living in a world where knowledge and information is free and easy accessible. As illustrated above, people choose to have a blurry mind, instead of having it cleared up by correct information that is available for everyone (at least it should be). It is sometimes scary to see how people tend to choose dark and obscure ideas instead of clear and simple facts. But as Darwin put it: “Ignorance more frequently begets confidence than does knowledge: it is those who know little, and not those who know much, who so positively assert that this or that problem will never be solved by science.”

Zillo: Einstein wasn’t only a great scientist, he also was a pacifist and became politically involved. E.g. he tried to prevent the bombing of Hiroshima with the nuclear bomb 60 years ago (another anniversary!). Do you think the world in our days would be better if there were more people with such an involvement?

I am a pacifist myself. I am actually quite hardcore anti war, as well as a pro environment- and pro equal rights for all races, sexes and sexual preferences-liberal.
I am not sure if an educated mind guarantees peaceful behaviour, as it takes for example a lot of scientific research to build intelligent bombs and other destructive machines. Einstein, being a scientist who clearly understood that we are just a tiny spot in both time and space, also realised that the survival of human kind can only be reached if we live properly together respecting the idea of being just a silly little nothing in a great universe. Bombing other species is in a way pure self-annihilation. Maybe the next step in evolution that humanity consciously should take is learning how to live together in a peaceful way. I guess getting rid of that blurred mind as described earlier is the first step in that direction. That’s the philosophical idea behind ‘After Einstein’.
Email ThisBlogThis!Share to TwitterShare to FacebookShare to Pinterest