Currently, I am far more inspired by, say, the wavy guitars of Fields of the Nephilim, the creamy distortion by KoRn, the beats of Crystal Method or even the dreamy tricks and bits by LTJ Bukem, than I am by the contemporary electro/ebm stuff. And I strangely kind of like the idea that the new stuff will piss off at least some people.
I had however a surprising collision yesterday with guitar player Schidde. I didn't see it coming that I would piss him off with new stuff. But apparently I did.
He had an accident at work and dropped by with an eye patch on. I tend to call him 'captain' anyway, but yesterday he totally fitted the 'pirate' picture. Frustrated as he was by the pain and troubles that he was in, I kind of pushed him even deeper into the pull of misery by playing the new demo I had been working on for two weeks (for God's sake).
The producer I am, I had been slicing the recorded guitar stuff and had been rearranging all the bits and pieces into a new (and for all I knew) 'exciting' new track. The guitar player he is however, he really was shocked by this totally alienated piece.
It was interesting though to have this clash. Officially it was our first real clash. Interesting, because now we can say we're a 'band'. Because yes, we found new solid ground to work further on the track. Together. 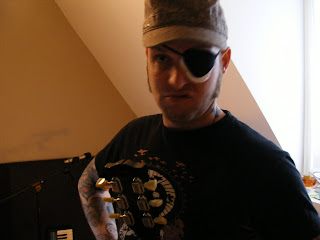