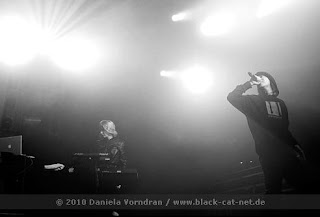 I’ve been so busy with a bunch of things that I had the feeling I was slightly going mad. But it felt comfortable to see the people around me acting more or less crazy as well. For example Schidde. He went on a 10 day sunny vacation to Malta and now thinks that his future lies over there. And then Christophe, who’s becoming a father next month, is losing it too. He shaved off his hair and thus dramatically decreased the amount of hair in Diskonnekted. Finally, because Didier is moving house with his girlfriend into a new apartment, his craziness is, as Agent Smith would say: inevitable.
Why am I going mad? After revamping the old Mildreda as a side project, I had to take care of the first official gig for the Gothic Festival (last week). It went very smooth (featuring Gwenny on keys and Mika from This Morn’ Omina on percussion). Check Mildreda on Facebook, Myspace or Blogspot.
Now that I survived that trip, I am able to concentrate fully on Diskonnekted. Rehearsals start this evening for the gig at the Paulusfeesten. We will play a lot of the new stuff and I am really excited about that. I am sure we will post some videos of the rehearsals soon.
Email ThisBlogThis!Share to TwitterShare to FacebookShare to Pinterest