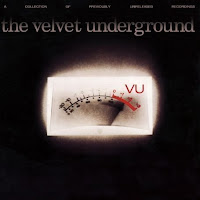 It was Alfa-Matrix who asked me for a forthcoming interview to make a list of my 15 favourite and most inspiring tracks ever.
That's of course a very hard and maybe even terrible thing to do, as you have to kill your darlings.
But I managed to make a list of tracks and bands I love very much. And it seemed fun to tell you why these tracks mean that much to me.
I had a quick look on youtube and I was lucky to find a video for each track.

The Velvet Underground: I can’t stand it


The selection kicks off with The Velvet Underground and I am sure a lot of other journeys started right there as well. When it comes to alternative music, I think The Velvet is one of the most influential bands ever. I like everything about them: the sound, the looks, their flirtations with art (and especially Andy Warhol), Lou Reed being their frontman, etc. The Velvet Underground is more than a band, it’s a way of life.


Christian Death is another band that played a major role when growing up. My journey started with gothic and dark wave after being a metal head and I was especially fond of the sound and image of Christian Death. There’s something mythical about Rozz Williams. After a gig I gave him a Mildreda demo tape. A few months later he committed suicide. I hope there’s no causal connection.

Fields of the Nephilim: For her light


Another iconic band between myth and legend is Fields of the Nephilim. The guitar sound has something Pink Floyd-ish giving the dark wave sound that unique floating character. I still listen to them a lot.

Faith No More: From out of nowhere


Was Faith No More the best band in the world? Probably they were. They came up with a fresh mix of styles and Mike Patton is a master of performance and an amazing singer. I picked this track because I remember I was immediately hooked after hearing this one. My love for cross-over started that day. The rolling drums give me a rush of energy every time.


I can’t make a list without naming Nine Inch Nails. The band changed everything for me. It made me like electronics. It made me like weird and dark stuff. It was something I wanted to do and become myself.


The way noise, feedback, overdistorted guitars and pumping drum machines were interwoven into lush and ‘easy’ melodic songs with heavenly vocals, was surprising and very inspiring for me. I like this duality, and the sound of Curve has been an influence ever since.


I don’t like everything they did, but a lot of tracks are simply amazing. After a long hiatus, the Doomsday festival was their first re-appearance. A gig I unfortunately didn’t attend to. Worlock has always been a favourite and I like this live version.

The Eternal Afflict: The agony


It was in Germany that the gothic and electro scene got a real boost during the nineties. It was an exciting time for a teenager with lots of bands that inspired me. There was Das Ich, Goethes Erben, Project Pitchfork, Placebo Effect and Calva Y Nada to name a few bands. It’s very difficult to kill your darlings, but if I can only pick one for this list, I have to choose The Eternal Afflict. They merged the gothic and dark wave feeling with pure electronic arrangements. It sounded aggressive and emotional at the same time. I saw them live every time they went to Belgium. Good times.

Depeche Mode: In your room


Just like I can’t make a list without naming NIN, I also have to name Depeche Mode. I was a late adapter and it only was when ‘Song of faith and devotion’ came out I really became a fan. A huge fan I might say.


It was very hard to pick a Prodigy track because there are so many tracks I love. I remember I wasn’t convinced at first, but my doubt turned quickly into an intense adoration for the band. I chose the Pendulum mix as that band is very interesting and inspiring as well. They reinvented the classic by The Prodigy and gave it that unique solid mix of drum & bass with rock elements. Superb.


Just like with The Prodigy my initial doubt turned into a neverending adoration for the band. They float somewhere between very alternative electronica and rather commercial dance. I love this duality that led to classics like Ebeneezer Goode and of course Move any Mountain (Pro>Gen). It was hard to pick a track, but I guess I couldn’t get around this one.


After bands like Underworld, Chemical Brothers and Orbital paved the path there was a boom of new dance projects during the nineties. Fluke was one of them and I was hooked the first second I saw them live at a festival. It was the perfect blend of rolling break beats, strong bass lines, dirty grooves and cool vocals. The Diskonnekted track ‘Playstation’ was my personal salute to them. Everyone should also check the band Syntax who featured Fluke members with the unique vocals by Jan Burton.


Progressive dance by the likes of John Digweed and Sasha plays a very imported role in my life. It’s probably the genre I listen to most and it’s of course an influence as well. My favourite dj and producer is Nick Warren who is probably most known as producer under the name of Way Out West. This rather recent track is a perfect example of what I like about this genre: a mellow and floating mood, tight production, slightly evolving melody. All you need now is some sun and a mojito.

Sounds from the ground: Pearl


I always loved the dub and ambient inspired electronics by bands like The Orb, Dreadzone or the stuff from the legendary Planet Dog label. The music I produce myself has always a rather dark mood, and it seems I just can’t escape that direction. But I really do enjoy the positive and relaxing vibes from bands like this. ‘Kin’ is a fantastic album by Sounds from the Ground. I especially like this track with its cool almost hypnotic vocal samples of an Irish girl recounting an old Irish myth of Oisin.


I listen to ambient everyday. I would even dare say it has therapeutic power for me. You can call it brain massage. My all time favourite is this psychedelic journey by Sunkings. I remember hearing it for the first time after a great summer day when we were relaxing with friends and doing our psychedelic escapades. Good times.