A chance to live inside your dreams 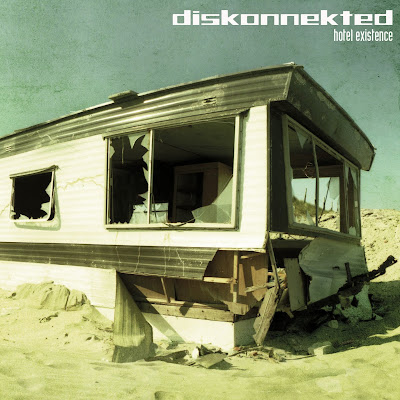 4 years! Some 48 months... It's the time it took for Belgian artist Jan Dewulf to redefine the DISKONNEKTED concept and return with an all new philosophy, new sound, new image...
Strong and combative, DISKONNEKTED proudly presents on his 4th studio album "Hotel Existence" a new formula that brings the band through raving breaks, deep and stuttering bass, catchy poignant vocals and electronic soundscapes. Inspired by a Paul Auster novel, the new songs reflect the general idea of the inner fantasy that promises you a better world, but becomes a cancer of unfulfilled expectations.
Apart from being an explosive intermix of styles that's never been heard before in the contemporary industrial/electro scene, 'Hotel Existence' is also an emotional quest that will shake your inner world.

You can't place DISKONNEKTED's music in one specific genre, since every challenging genre is reflected in this album: from drum 'n bass and dubstep, to floating electronics and solid EBM. A true clash of styles exploring different electronic genres and offering what might be the freshest album of the year! Fans of PENDULUM's raving breaks or the uncompromising cross-over of CELLDWELLER will be delighted to see those elements being also introduced in a modern electronic hybrid style.

This preview features a few images from the "Paris, Texas" movie by Wim Wenders. The melancholic mood fits the general idea of the album: the inner refuge, darkened by failed expectations.

NATHAN: The inner refuge, Harry. The place a man goes to when life in the real world is no longer possible.

HARRY: Oh. I used to have one of those. I thought everyone did.

TOM: Not necessarily. It takes a good imagination, and how many people have that?

HARRY: (closing his eyes; pressing his forefingers against his temples): It's all coming back to me now. The Hotel Existence. I was just ten years old, but I can still remember the exact moment when the idea occurred to me, the exact moment when I found the name. It was a Sunday afternoon during the war. The radio was on, and I was sitting in the living room of our house in Buffalo with a copy of Life magazine, looking at pictures of the American troops in France. I had never been inside a hotel, but I had walked past enough of them on my trips downtown with my mother to know that they were special places, fortresses that protected you from the squalor and meanness of everyday life. I loved the men in the blue uniforms who stood in front of the Remington Arms. I loved the sheen of the brass fittings on the revolving doors at the Excelsior. I loved the immense chandelier that hung in the lobby of the Ritz. The sole purpose of a hotel was to make you happy and comfortable, and once you signed the register and went upstairs to your room, all you had to do was ask for something and it was yours. A hotel represented the promise of a better world, a place that was more than just a place, but an opportunity, a chance to live inside your dreams.

From The Brooklyn Follies by Paul Auster
Email ThisBlogThis!Share to TwitterShare to FacebookShare to Pinterest